One of the most common reasons for trademark disputes has to do with the perceived similarity between existing trademarks. The two trademarks are considered “similar” if they share common characteristics connected to their appearance, sound, meaning and commercial impression, and if they are used for related goods or services. This is seen as a problem from brand perspective because the consumers might believe that the owners of the two trademarks are related, affiliated, connected, or that the goods or services originate from the same source.

Big companies with established brand reputation are especially vigilant when it comes to monitoring registration of trademarks with even slightest similarities, as there have been numerous cases of small businesses trying to use these similarities to promote their own products and services. Sometimes, however, big brands are also keen on raising oppositions against companies that pose virtually no threat to their business, which can be viewed as an aggressive approach to brand enforcement. Starbucks is one of the companies that has been involved in both types of trademark disputes. 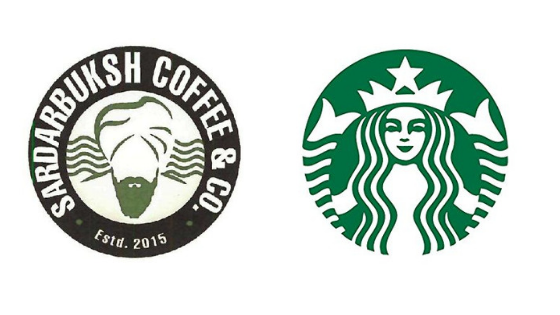 The story of Starbucks store dates back to 1971, when the first coffee store opened in Seattle, Washington. Today, with more than 32,000 stores in 80 countries, Starbucks is the premier roaster and retailer of specialty coffee in the world. Thismakes signs associated with its brand rather attractive for other less well-known coffee shops. The internationally recognized coffee company registered the trademark STARBUCKS and the logo depicting a "crowned maiden with long hair" in India in 2001. Another coffee brand, "Sardarbuksh Coffee & Co", established their business in India in 2015. "Sardar" is a Hindi word meaning "Commander" and "Buksh" meaning "Pardon." In 2017, Starbucks sent a letter to Sardarbuksh Coffee demanding to change their logo. The opposition was based on the fact that when two trademarks are placed next to each other they are likely to create confusion and mislead the consumers. The phonetic and visual similarity of the two brands, as well as the fact that both parties are dealing in same kind of trade and offering same services to its customers, led to the conclusion that there exists a high likelihood of confusion. But since Starbucks, besides having a pronounced reputation, were the first to file for a trademark associated with their goods and services in India, are entitled to full ownership of their sings. For that reason, the court ruled in favour of Starbucks and ordered the defendants to change the name of the business from “Sardarbuksh Coffee & Co.” to “Sardarji-Bakhsh Coffee & Co.”

Contrary to the Sardabuksh case, Starbucks were not so successful in their efforts to stop Wolfe’s Borough Coffee Inc., a small New Hampshire coffee seller, from producing “Charbucks” drinks. Once again, the case revolved around a possible likelihood of confusion on behalf of the customers. Black Bear, owned and operated by Jim and Annie Clark, is a micro roastery that primarily fulfills online orders, while maintaining accounts at a small handful of New England supermarkets and one other New Hampshire retail location. Some of their listed products include “Charbucks Blend,” “Mister Charbucks” and “Mr. Charbucks” coffee, which Starbucks claimed could lead to false associations with their brand.

As the main piece of evidence for their claims, Starbucks used a phone survey of 600 people by the pollster Warren Mitofsky, which found that “the number one association of the name ‘Charbucks’ in the minds of consumers is with the brand ‘Starbucks.’” However, the court found that the survey was “fundamentally flawed” and had a separate assessment of consumers’ thoughts of the word “Charbucks” in relation to Starbucks products. Which led to their final decision that the two trademarks are only “minimally similar” and therefore Black Bear Roastery may continue using disputed names in relation to their goods and services.

Trademark law was created to protect owners of goods and services by discouraging others from adopting “confusingly similar” brand names, logos, or looks. However, to oppose the registration of a trademark, the brand that raises opposition has to provide sufficient evidence to identify commercial infringement and potential customer confusion. If neither of these exists, then the pursuit of a trademark lawsuit can lead to a dead end. Starbucks cases serve as a reminder to business owners that neither minor associations between two brand names nor reputation of one of the brands are enough to prove infringement on their own. It’s the combination of these factors that device the outcome of each case.