Brands in the Metaverse: recounting most notable digital trademark applications of 2022

As the numbers surrounding digital assets in the virtual worlds continue to climb, more and more companies are turning their attention to this new and promising marketplace. According to the report by Prophecy Market Insights, the market value of Metaverse is estimated to surpass $947.1 billion by 2030, and as such, both established and new brands are paying close attention to the latest trends and developments in this area.

The thrilling aspects of digital goods and services have gradually captured the attention of a wide spectrum of celebrities, including Kanye West, Snoop Dogg, Rihanna, and Miley Cyrus. Sports leagues are also joining in, with opportunities for purchasing NFT trading cards, or attending the next generation of fantasy league events. Top-performing athletes such as King James LeBron and Kevin Durant are not missing an opportunity to further develop their brands by offering fans new ways to connect with them through ownership of unique digital assets. A wide range of industries is eager to explore the benefits offered by emerging virtual spaces.

According to Mike Kondoudis, licensed trademark attorney, in 2022, more than 5,364 trademark applications were filed with the U.S. Patent and Trademark Office (USPTO) for Metaverse and related technology, over two and a half times more than the 1,890 recorded in 2021. Following this trend, a number of prominent brands across all industries are expanding their trademark portfolio to cover digital assets. 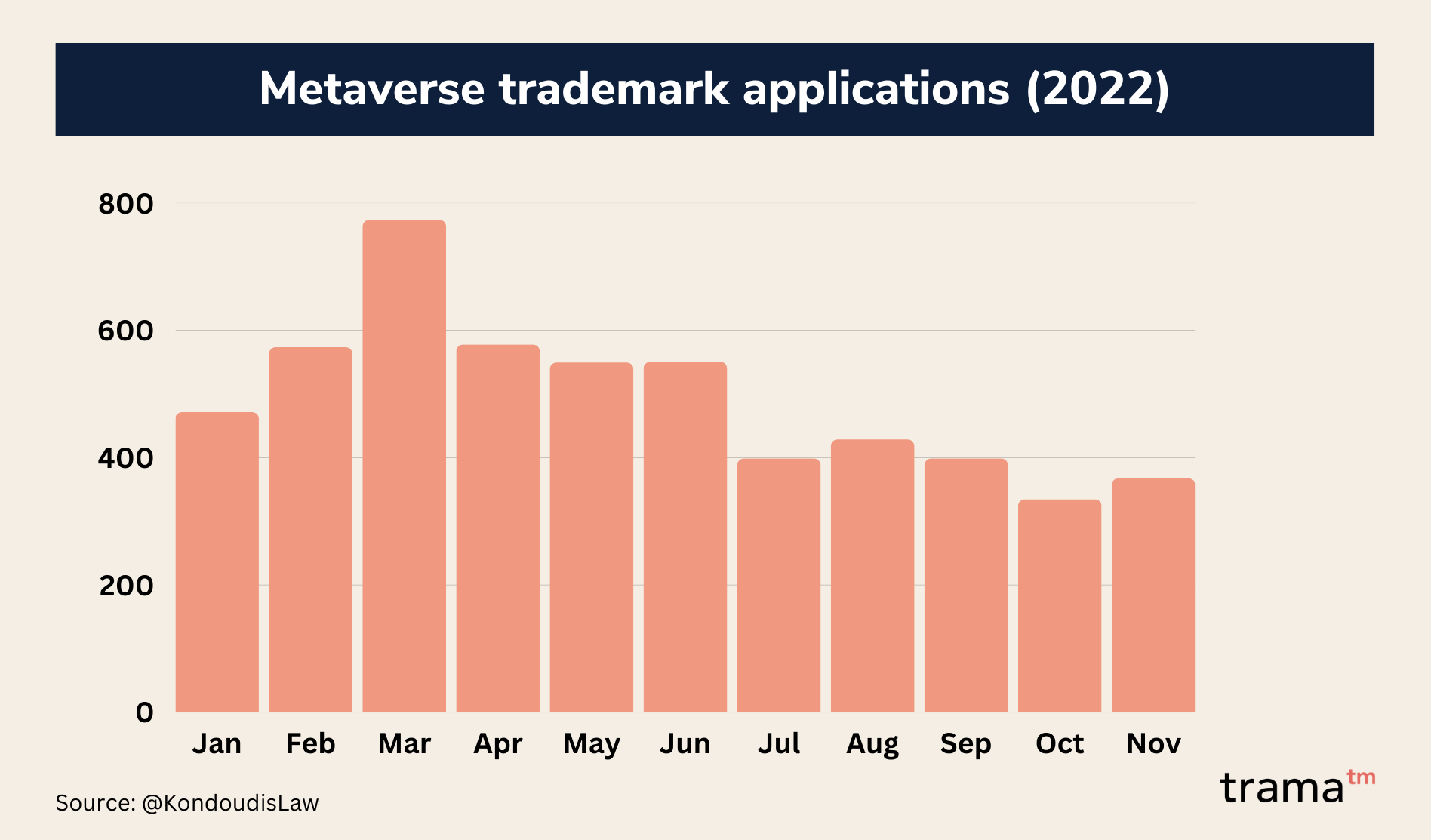 French luxury brand, Hermès, has filed its first trademark application to protect its name in the Web3 space in August of 2022. This application followed a lawsuit against Metabirkins founder Mason Rothschild in January. Rothschild’s NFTs, called “MetaBirkins”, turned out to be very successful in the Metaverse and have been sold for the equivalent of thousands of euros each. As a consequence, Hermès sued the artist for trade mark infringement, on the grounds that he registered and used the domain name “MetaBirkins.com”, obtaining an economic revenue and taking unfair advantage from the reputation of the luxury brand. The lawsuit gave the company the necessary push to extend its IP protection to the realm of digital goods. Besides NFTs and virtual reality, the trademark application also covers retail store services featuring digital wearables, an online marketplace for buyers and sellers of virtual goods, and financial services, including providing electronic transfer of a virtual currency for use in connection with digital collectables and NFTs.

Luxury brand Dolce & Gabbana set a new record for fashion NFTs, bringing in around $5.7 million in nine NFT auctions. Earlier in 2021, Dolce & Gabbana collaborated with UNXD, NFT marketplace for digital luxury, which resulted in the Collezione Genesi. The luxury brand auctioned off two copies of “Dress from a Dream” (both NFTs and real custom-made dresses), the Glass Suit, and the NFT “The Impossible Tiara”, a purely digital piece, for the equivalent of 5 million euros. Apart from these unique pieces, buyers of the NFTs were given perks such as the opportunity to attend the D&G fashion shows. The luxury house also plans to build and provide users the opportunity to participate in virtual fashion shows, such as Decentraland’s Metaverse Fashion Week that took place in March 2022.

According to the U.S. Patent and Trademark Office, Nike filed several applications in October 2021 for the term “Nike,” the brand’s famous slogan “Just Do It,” and its iconic “swoosh logo”. Two more applications for the “Air Jordan” and “Jumpman” logos were filed the following day. In total, seven different applications have been submitted in the period between October and November of 2021. In late November 2022, Nike announced it is creating its very own space in the metaverse, .Swoosh, a new platform under Nike Virtual Studios that will house the sportswear giant’s virtual apparel, footwear and accessories. Following the announcement, new trademark applications for “DOTSWOOSH” and “.SWOOSH” were filed. As the platform allows community members to collect and trade Nike’s virtual creations and wear the virtual apparel in digital games and immersive experiences, the trademark applications provide Nike extra protection in the event others attempt to use the brand in an unlicensed way.

Mercedes-Benz Group AG, the German multinational automotive powerhouse, entered the Metaverse by filing a total of five trademark applications for its own line of non-fungible tokens (NFTs) in December this year. Some of the trademark filings include “Mercedes Benz, Mercedes, S-Class, G-Class, and Maybach,” with the company claiming that it plans to use the trademarks to develop NFTs, virtual clothing and goods, virtual vehicle parts, financial services, and cryptocurrency trading. The trademark application from Mercedes-Benz includes the following:

Coca-Cola was one of the first food brands in the metaverse. Coca-Cola ventured into the metaverse with its virtual drink- Coca-Cola Zero Sugar Byte limited Edition Flavor in April 2022. Along with the virtual drink, the physical drink was also launched. In July 2022, Coca-Cola released several new digital collectables, of which there are now more than 4,000. People who own these digital collectables have access to special perks, like Coke Studio experiences, gaming events, and early access to limited-edition product launches.

Jack Daniel’s applied for three trademarks for metaverse and NFTs with the USPTO in September 2022. The filings indicate that the company is planning to sell NFT-authenticated media, virtual beverages, barware, clothing, and collectables in the metaverse. The trademarks also cover downloadable digital goods, which could be computer programs featuring beverages and other Jack Daniels branded items. More than that, the company has registered trademarks for downloadable computer software that provides information in the field of beverages and software that could be used as a digital wallet.

The rapid growth in the popularity of digital goods and services and associated trademark applications, however, goes hand in hand with the emerging trademark issues concerning virtual brand assets. Experienced trademark lawyers can help you select the correct classification categories to protect your brand as you enter the digital marketplace. To learn more about trademark options for NFTs and other digital assets, contact an experienced trademark attorney today.